The inexorable yearly rise of medical school tuition has led to corresponding increases in medical student indebtedness. According to the American Medical Association, 86 percent of graduating medical students in 2011 had loans to repay, and their average debt was more than $160,000. The greater long-term income potential from choosing a subspecialist rather than a primary care career is only one of many factors that influence medical students' specialty choices. That being said, my students increasingly ask if they will be able to repay their loans, support spouses and children, and save enough for retirement on a family physician's income - a question that would have been unlikely to come up a generation ago.

In an innovative analysis published in Academic Medicine, researchers from the American Association of Medical Colleges and Boston University concluded that the answer is "yes." Using economic modeling software, they examined variety of loan amounts and repayment scenarios projected against average household expenses in a high-cost urban area (Boston) and income levels for primary care and subspecialist physicians. The bottom line:

Our economic modeling of a physician's household income and expenses across a range of medical school borrowing levels in high- and moderate-cost living areas shows that physicians in all specialties, including primary care, can repay the current median level of education debt. At the most extreme borrowing levels, even for physicians in comparatively lower-income primary care specialties, options exist to mitigate the economic impact of education debt repayment.

The authors defined "extreme" borrowing levels as $250,000 or greater, and noted that options for these highly indebted physicians include extended repayment terms and federal loan forgiveness programs such as the National Health Service Corps. They also noted that physicians who choose to live in rural or low-cost areas will have considerably more discretionary income after expenses.

Although this analysis did not address the equally important question of why the primary care-subspecialist income gap exists and what can be done to reduce it, these findings should be reassuring to students considering family medicine careers.
Posted by kennylin at 12:10 PM

When I last saw my personal physician for a checkup, she recommended that I undergo screening for lipid disorders, per the guidelines of the U.S. Preventive Services Task Force. Although the office had a phlebotomist on site, my appointment was in the afternoon, and I had already eaten breakfast and lunch. Consequently, she instructed me to make a separate morning appointment to have my blood drawn after an overnight fast. Due to my hectic schedule, several months passed before I finally got around to doing this (fortunately, the results were normal). As family physicians know, many patients who are sent for fasting tests never have those tests done at all.

A recent study published in the Archives of Internal Medicine suggests that there may be little reason for most patients to endure the inconvenience of fasting before lipid testing. The authors analyzed the relationship of fasting duration to variations in cholesterol levels obtained in more than 200,000 patients in and around Calgary (Alberta, Canada). In this population, the time since one's last reported meal had no effect on mean total cholesterol and high-density lipoprotein (HDL) cholesterol levels. Mean low-density lipoprotein (LDL) levels varied by up to 10 percent, while mean trigylceride levels varied by up to 20 percent. The authors and two editorialists conclude that for most purposes in primary care, including global cardiovascular risk assessment and monitoring response to pharmacologic treatment, nonfasting cholesterol measurements are likely to yield equivalent information to measurements from traditional fasting samples.

Rare is the single study in the medical literature that changes usual clinical practice on its own, and for good reason. Consistent evidence from multiple studies is usually needed to verify or refute impressive initial findings. Further, the cross-sectional design of this particular study might have masked unmeasured variables that would have been better controlled for in a randomized clinical trial. That being said, if any single study should be called a practice-changer, I think this one fits the bill. What's your opinion?
Posted by kennylin at 3:47 PM

Strategies for physicians to prevent burnout

Although they probably came as little surprise to most of us who practice primary care, the results of a national survey of physician burnout in the Archives of Internal Medicine earlier this year made headlines in The New York Times and The Atlantic. This study found that 1) physicians are more likely to experience symptoms of burnout than similarly educated workers in the U.S. general population; and 2) physicians on the "front line of care access" - family physicians, general internists, and emergency medicine physicians - had the highest rates of burnout.

A Curbside Consultation in the November 1st issue of AFP discussed the distinct but closely related problem of demoralization in a family physician who serves as the part-time medical director for a financially troubled clinic for children with developmental disorders. This physician was forced to accept layoffs of several key staff members without a corresponding decrease in workload:

She recognized the great need of these children and families, and had talked with other staff and administration about additional programs she wanted to develop. She now would have to say good-bye to coworkers and abandon her hopes for a larger and more robust program. She realized that the remaining staff, herself included, would have to work harder, and that she would have less time to spend with patients, the part of the work she found most fulfilling. Patients who needed the most help would, in fact, get less help. ... Over the next week, she became dejected and sad.

In the accompanying commentary, Dr. Stewart Gabel connected the often temporary state of demoralization to the more serious and persistent state of burnout:

Demoralization is a state of hopelessness and helplessness that is akin to, but separable from, depression. It is associated with a sense of subjective incompetence, the belief that a person is unable to express his or her values and achieve his or her goals. Demoralization has an existential dimension that is associated with the affected person's experienced losses. ... Moving past demoralization involves remoralization, or the renewal of one's personal values and the activities that stem from these values. ... However, if not addressed, persistent feelings of demoralization are likely to result in or contribute to burnout.

How can physicians prevent the demands of practicing present-day medicine from leading them down the road to burnout? An article in Family Practice Management suggested eight ideas, including joining a physician support group; strengthening interpersonal communication skills; and making it a priority to address the spiritual needs of patients and themselves.
Posted by kennylin at 3:27 PM

Pediculosis is a distressing diagnosis that frequently causes children to be sent home from school or day care. In the September 15th issue of American Family Physician, Dr. Karen Gunning and colleagues provided a treatment update for pediculosis and scabies. Permethrin 1% lotion or shampoo is the recommended first-line treatment for head lice infestation (see illustration below). However, permethrin resistance is increasingly common in many communities, and second-line therapies have substantial disadvantages: malathion is flammable, and lindane is neurotoxic and cannot be used in young children. Additional safe, effective treatments are now being developed. 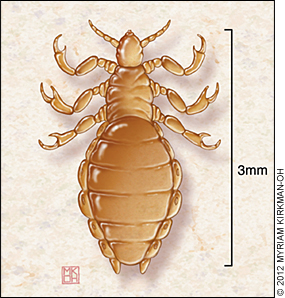 Yesterday, researchers reported in the New England Journal of Medicine the results of two randomized trials evaluating a single 10-minute home application of topical 0.5% ivermectin lotion for head lice in patients 6 months of age or older. Compared to the control groups, patient assigned to receive ivermectin were significantly more likely to be louse-free at day 2 (95% vs. 31%) and day 15 (74% vs. 18%), with no difference in adverse events. A major limitation of these studies is that topical ivermectin was compared to a placebo rather than to established head lice treatments.
Posted by kennylin at 9:00 AM