Should pharma have unrestricted access to your prescribing profile?

For many years, it has been a common practice for pharmaceutical companies to use individual physicians' prescribing profiles to tailor their marketing and sales strategies. For example, if a drug rep had access to data showing that a particular family doctor was prescribing more of a competitor's anti-hypertensive drug, he or she might make a point of dropping off a batch of samples to change that doctor's prescribing practices. As explained in a previous AFP Journal Club, this strategy is often very effective for the drug company, but ends up increasing patients' out-of-pocket expenses in the long run.

Recently, state legislatures in Vermont, Maine, and New Hampshire have passed laws that restrict access to a physician's prescribing profile for marketing purposes. Drug companies and other groups argue that these laws violate the First Amendment, equating a doctor's prescribing data to constitutionally protected "free speech." A news article in yesterday's New York Times reported that the Supreme Court will hear arguments this week in a lawsuit brought against Vermont's confidentiality law by prescribing data collection companies and the industry group Pharmaceutical Research and Manufacturers of America.

In order to balance the sometimes deleterious effects of aggressive drug marketing, AFP provides numerous online resources to support our readers in decision-making about prescriptions. These resources include a systematic eight-step approach to prescribing and individual reviews of new drugs that utilize the STEPS (Safety, Tolerability, Efficacy, Price, and Simplicity) approach. Are there other ways that we could help you and your patients make informed drug choices?
Posted by kennylin at 10:06 AM

AFP By Topic now available for iPhone and Android 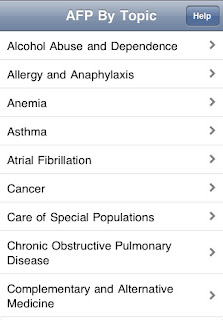 Last year, we launched "AFP By Topic: Editors' Choice of Best Current Content" to provide readers with easily navigable collections of our best current information on conditions that they regularly encounter in clinical practice. Now you can take AFP By Topic with you on the go by downloading a free app available for the iPhone and Android. For more information on what's included in the topic collections and how to navigate the app, please see the Inside AFP column in the April 15th issue.
Posted by kennylin at 2:45 PM

The future of house calls

Although house calls remain a part of family medicine residency training, the proportion of family physicians who perform them in practice has been declining for years. One notable exception is Steven Landers, MD, MPH, medical director of the Cleveland Clinic Home Health Agency. In previous commentaries published in the Annals of Family Medicine and JAMA, Dr. Landers has called home care "a key to the future of family medicine" and "the other medical home," distinct from office-centric Patient-Centered Medical Home initiatives supported by the American Academy of Family Physicians and other primary care groups.

American Medical News recently reported that the 2010 health reform law gave house calls a boost by mandating "Independence at Home," a Medicare demonstration project that will offer financial incentives to primary care teams performing house calls in selected high-cost areas of the U.S. starting in 2012. A similar program sponsored by the HealthCare Partners Medical Group in California, Nevada, and Florida led to a 20 percent drop in hospital use over its two years of existence, saving $2 million per year for every 1,000 members.

In addition to reductions in hospitalizations and costs, house calls produce other benefits for clinicians and patients, including improved continuity of care and new patient referrals, as family physician Samantha Pozner, MD argued in a 2003 article published in Family Practice Management.

As house calls appear poised to make a comeback, the April 15th issue of AFP delivers a timely, updated review of their effectiveness, essential elements (including a sample house call checklist), and practice management details such as current billing codes for house calls and domiciliary care.
Posted by kennylin at 9:00 PM

Evaluation of a child with "failure to thrive"

"Failure to thrive is a term used to describe inadequate growth or the inability to maintain growth, usually in early childhood," begins an updated review of this topic in the April 1st issue of AFP. Accurate identification of failure to thrive should rely on a combination of anthropometric criteria, using the 2006 child growth standards established by the World Health Organization. According to Drs. Sarah Cole and Jason Lanham, 5 to 10 percent of children in primary care settings in the U.S. have failure to thrive, with the vast majority presenting before 18 months of age.

The diagnostic evaluation of failure to thrive includes "a detailed account of a child's eating habits, caloric intake, and parent-child interactions," as well as observations of breast or bottle feeding technique. Unless the child presents with one or more red flag signs or symptoms suggesting a non-behavioral cause of failure to thrive, routine laboratory testing is not recommended. Treatment usually consists of nutritional counseling and supplementation to achieve catch-up growth, with frequent follow-up visits to monitor progress.

As a previously published AFP Curbside Consultation has illustrated, however, diagnosing a psychosocial cause of failure to thrive is often challenging. The difference between neglect and parental ignorance of appropriate feeding habits may not be clear, especially when parents delay seeking medical attention for a child with apparently obvious signs of malnutrition and growth delay. When you recognize a child with failure to thrive in your practice, under what conditions would you consider referring him or her to a child protective services agency for investigation of parental neglect?
Posted by kennylin at 11:42 AM